I’m on a narrowboat this week and not paying much attention to the news, but when an MP is murdered in cold blood it’s an event that can’t be ignored.

It seems as though the perpetrator was suffering his own mental health problems, but such extreme action has to have some underlying trigger. It wouldn’t be unreasonable to guess that the Brexit campaign could have been it. I can’t be the only one to have become thoroughly disenchanted with the way in which the campaigns have descended from at least some semblance of intelligent debate to bickering, personal attacks and name calling. It seems that this has to be the way of modern politics.

What depresses me further is that the debate seems to have become about nationalism and whether you are ‘for’ or ‘against’ Britain and her continued existence. To even suggest that a vote to Remain is anti-British has to be the ultimate in distortion of reality.

I’m as passionate about this country – by which I mean the United Kingdom in its entirety – as anyone, and it’s because of this very belief that I am so strongly in favour of staying in.

That doesn’t mean I’m happy with the status quo, far from it. Europe is by no means perfect, and if it is to succeed in the long term it has to change. I think that the idea of ever closer political union in Europe is wrong, and that the EU has made some significant errors of economic policy that haven’t helped the lives of its citizens.

Red Tape Can Be Good

But despite the rhetoric there is a lot of good to being a member of the European ‘Club’. A lot of the so-called ‘red tape’ that comes out of Brussels is aimed at harmonising trade, and that requires regulations to be proposed, drafted, debated and accepted. In return our businesses can sell their goods right across Europe with no further restrictions, and this has been a boost to trade over the years. In my own field, financial services, it has taken a long time to get this harmonisation in place and there is still a way to go, but Britain has been a significant winner in its areas of expertise, with 30% of the European banking market, half of Europe’s fund management business, and well over 80% of hedge fund activity, a major money-spinner for the City. Leaving the EU would definitely put this major trade at risk, and it could take years to recover our position. Surely if rules are being drafted for the pan-European market that we will have to conform to anyway, it makes sense to have a place at the negotiating table?

Perhaps the greatest area of concern for many people is that of immigration. On this one I’m probably of a different view to many, because I’m all in favour of open borders. In my idealistic world it would be possible for anyone to travel anywhere without hindrance, and it would be great to think that, one day in the future that might happen. I do accept that the world isn’t ideal, of course, and in reality controls are required, but free movement of goods, services and people within the EU seems to me to be a laudable objective. This doesn’t mean free access to all services the state provides, of course, and it’s here that the debate should focus in my view. David Cameron has already gained acknowledgement of this within Europe and the Government’s policy has for some time been aimed at limiting benefits for migrants.

There’s a well-proven economic case for such free movement. At a time when Western economies are facing the prospect of ageing populations as the 1950’s baby boomers’ move into retirement, we need younger workers to be able to grow. It’s also true that many new businesses are started by immigrants seeking a better life for their families. Ultimately the way to resolve the pressure of immigration is to help make the countries from which the people come to be stable and prosperous, and here the EU has a role.

If we were to exit the Union I really can’t see how things would change much on this front, either. A large proportion of immigrants are from non-EU countries already, and we couldn’t hope for much tighter controls whilst enjoying unfettered movement of our own goods, services and citizens. It’s folly to believe otherwise.

There is evidence that the EU is already changing. Its politicians are getting the message that, right across Europe, there is disenchantment with its opaqueness and remoteness from the people whose lives it affects. The influx of smaller nations who have joined in recent years 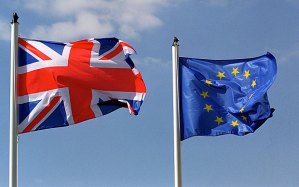 aren’t interested in ever closer political union, they want better access to Europe’s markets, stability, and protection against aggressors, notably Russia. Britain, with its emphasis on defence (on which we spend more than most other Euro nations) and trade is seen as a strong and consistent voice with the scale and economic clout to be a positive leader in Europe. The very intensity of the UK Brexit debate has made politicians across Europe sit up and take notice. We aren’t the only ones who aren’t entirely happy, as evidenced by rising nationalistic voices in France, Germany, Spain, Italy and many other countries. Something must be done.

I’ve always seen myself as something of a rebel. I’m all in favour of shaking things up and agitating for change. But I came to realise a long time ago that crusading through the streets holding placards and chanting slogans is nothing like as effective as being on the inside and influencing things with the people who hold the power. Attractive as it might feel to make a protest against Europe and ‘stand up for Britain,’ let’s not throw away years of negotiations and effort that could set us back 10 years or more and leave us with less influence and no real gains.

Instead, let’s create the necessary change from within with a strong voice and firm principles. Let’s stand up for Britain as a negotiating partner and not a truculent absentee.

In my humble opinion, a vote for Britain is a vote to Remain.