As a long-standing member of the Institute of Financial Planning I have always enjoyed attending the Annual Conference, held for the last few years in the luxurious surroundings of the Celtic Manor Resort in Newport. Today is the first day of the Conference and it’s already provided plenty of meaty food for thought.

I first got involved with the IFP in the early 1990’s, and much of what Chesterton House now practices has been learned from that long association. Members have always been generous in sharing ideas, and I’ve been highly impressed by their dedication to delivering great results for clients as well as wanting to know how to run highly effective businesses – two things that go hand-in-hand.

Twenty years ago the Annual Conference was held at Cambridge University, a mark of the aspirations of the leading players in the Institute at that time, during an era when salesmanship was much more highly prized by financial institutions than academic rigour. Since then, the regulators have imposed the need for learning on to advisers in the form of the RDR, which brought in the requirement for financial qualifications for anyone giving advice to the public. Many of the old school decided that was a time to leave the business, but for the IFP it felt like its time had come. With a burgeoning need for high quality advice from a wealthier, older and more time-pressured population facing an ever more complicated world, the IFP’s blend of holistic financial planning skills, high integrity and focus on long-term relationship based business models is proving successful for those practitioners who choose to follow it.

The Conference is the annual coming together of advisers and financial professionals seeking the latest ideas and techniques, as well as to enjoy the camaraderie of ‘front-line’ practitioners. It’s always an inspiring event and this year is proving no different.

We began this morning with a session specifically designed for members of firms holding the Accredited Financial Planning Firm designation, of which Chesterton House is proud to be one. An overview of a member survey that gave us some useful benchmarks on which we could measure our respective firms performance was followed by an excellent talk by Nicky Simonds-Gooding of Gazing Performance Systems about how to raise your performance in an increasingly pressurised world. Nicky taught us to use the Samurai principle of the ‘Double Gaze’ – being able to focus intensively on specific details whilst still having an eye on the Bigger Picture, something that resonated strongly with our approach at Chesterton House. She went on to remind us that the High Performance mind set says that however good we are, we can always improve, and suggested some techniques for generating that improvement. Inspiring stuff.

The Institute’s AGM was followed by a session discussing the future of the IFP, which has just agreed to merge with the Chartered Institute of Securities and Investments, a much larger body with an academic base. This has been a big deal for IFP members and, amongst general approval of the potential benefits of the deal, there was concern that the unique qualities of the IFP might be subsumed into the CISI over time. We were assured that wasn’t going to happen, and members were reassured by the obvious enthusiasm for the idea of an expanded organisation being able to spread the word about what real financial planning is and its potential to change people’s lives.

The next session asked, ‘Does Size Matter,’ with leaders of small, medium and large financial planning firms discussing how to continue to deliver a consistent client experience and the highest quality advice as firms grow. This is something that’s particularly relevant to me in my role as Chairman of Chesterton House as our own growth continues, and there were some useful observations from the panel that I noted down.

The next session from Alison Broadberry of Charles Russell Speechlys Solicitors explored the area of Estate Planning for Business Owners. This was another topic of great relevance to me as our Legal Team develops its role in working with families and successful business people to ensure that their assets end up where they intended. Alison explained how a ‘Company Will’ can be used to create certainty for business owners faced with the death of a partner or owner, as well as ways to use trusts to protect business assets on death and massively reduce tax bills. The session was a helpful reminder of these ideas that will be useful when advising clients who are in this situation.

The final session from Michael Langerup of ETF Securities asked, ‘What’s So Smart About Smart Beta’. This was a talk aimed at the investment geeks among us, investigating as it did the market for passive investments based on Exchange traded Funds (ETFs) and the differences between them. If you’re really interested in Systematic Factor Strategies based on key macro risks as a way to diversify your portfolio I’ll be happy to speak to you separately. Or send you to see Michael.

With a lively exhibition area used as a meeting and eating venue for the evening it was great to catch up with some old acquaintances as well as make some new ones. After such an interesting day in a great Conference venue its no wonder some of us keep returning each year.

Tomorrow is an early start as sessions start at 8.15am, and it’s just turned midnight as I write this so I think that’s enough for now. Over and out!

Standing in a large field wearing steel toe-capped boots in a chilly September wind isn’t our usual idea of Chesterton House-style hospitality, but it’s what we and around 30 clients and friends were doing this week. So what was it that had captured our interest?

We were guests of Foresight Investment group, owners of one of the UK’s largest solar energy farms, which happens to be located just a few minutes drive from our offices near the village of Wymeswold.

In fact it wasn’t until towards the end of the visit when the site manager invited our party to climb the small hill that overlooks the former airfield site of the farm that we fully appreciated the scale of this silent power station. Despite being home to an amazing 140,000 solar panels over a 190 acre area, the development is unobtrusive from the adjacent roads and I suspect that few local residents appreciate its scale either. 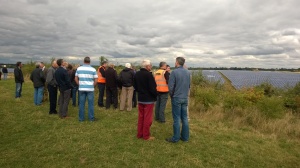 Looking out over a sea of solar panels

We had earlier been welcomed to the site by Nick Morgan of Foresight, and he had explained the investment merits of this form of energy production, with its stable and highly predictable revenue stream. Richard Urwin, Investment Director at Chesterton House, told the assembled group about the benefits arising from an index-linked income stream and why this farm had been included in our clients’ investment portfolios.

Site manager Arnoud Klaren then went on to share details of the site, how it was constructed, and how it harvests energy from the sun to generate a constant stream of electricity for the National Grid. With a potential output of 34 MW of electricity, the site produces enough energy to power the equivalent of 10,000 homes.

Except, of course, when there is no sun, which remained conspicuous by its absence. The grey skies got greyer, the wind got colder, and the boots got less comfortable as we stood and listened. We were pleased to hear that the panels still generate power even under the very darkest of daylight skies, but we were denied the opportunity to hear the inverter – a large caravan size metal box that turns the solar direct current into the alternating variety required by the grid – really sizzle, as Arnoud assured us it does when the sun shines bright.

It was obvious that the unseasonal chill hadn’t dimmed everyone’s enjoyment of the event, however. Arnoud fielded a wide range of questions with clear and enthusiastic answers, and we all learned a great deal about both the practicalities and problems of modern ‘clean’ energy generation as well as the financial implications involved.

As the world focuses on reducing its carbon emissions this promises to be one area that is ripe for continuing innovation. An obvious problem with solar-generated energy is what happens at night, and Arnoud described some of the ideas that are being developed to be able to create a stable energy stream, from the use of batteries to store surplus power, to using lakes that use surplus power to raise water in daytime allowing it to fall and generate hydroelectric power as required overnight. As the number of alternative energy generators increases, with consequent falls in installation costs, it becomes more economic to investigate these ideas and create workable solutions. Watch this space!

As the cool breeze continued we were pleased to retire to the Windmill Inn in Wymeswold which provided us with an excellent buffet lunch in their welcoming warm surroundings. The comments we received then and since confirmed that everyone had found this an enjoyable and very informative way to spend a morning.

We’re grateful to Foresight for this opportunity, which we may repeat in the spring. If you’re a client of Chesterton House, or you’re interested in the possibilities of using solar power in your portfolio, and you’d like to come along next time please drop Jenny a line at jenny@chestertonhouse.co.uk and she’ll get in touch when we’ve fixed something up.

And let’s hope that next time the sun comes out. I would love to hear that inverter sizzle!