It’s day 15 of our India trip, and we’re on a houseboat in the Kerala Backwaters. There’s activity outside our door, and we emerge from our air-conditioned room to an offer of coffee from the crew, which we enjoy sitting on the air-conditioned deck (i.e., it has no windows).

It’s soon time for breakfast. There’s fresh fruit, scrambled egg, toast and cereals, and it’s all delicious. We could get used to this. 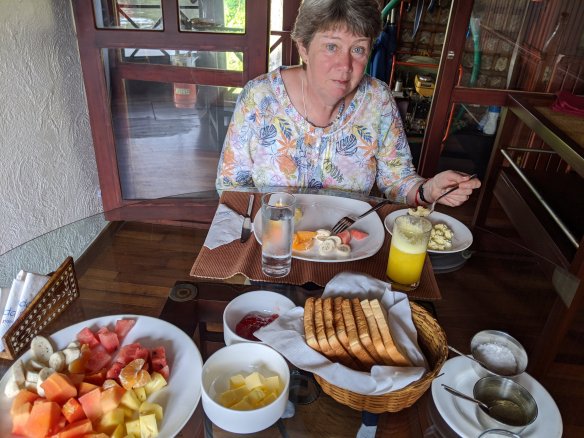 The crew cast off while we are eating and we slowly head back to base. There’s plenty to see though, with women washing clothes in the lake, children in smart blue uniforms walking along the bank to school, and then the school ferry crossing the waterway in front of us. And then we pass the school itself, a large drab grey building set back from the bank.

Further on we pass along a stretch where the bank narrows on each side to reveal sweeping views of the extensive paddy fields beyond. In one, two tractors tear up and down ferociously, water almost up to their axles, with water cascading away either side in plumes.

Eventually the base comes into sight, and we gradually manoeuvre to a position adjacent to another boat so we can disembark. We take photos with the crew, and before we leave we are asked to fill in the obligatory feedback form describing our experience. They get top scores across the board from us.

All too soon we’re on the road again and heading for our next hotel a few miles north on the shores of Lake Vembanad. It’s still only 9.30 so we’ve got time to kill, and Biju, our driver, suggests a couple of stops.

We drive back through the busy canal town of Alleppey, known as Venice of the East, and Biju pulls over to show us a coconut oil factory. Like many ‘factories’ here it’s a small open-fronted unit on the street. Biju speaks to the man on the desk who clearly has other things on his agenda today, but we’re granted a view into the factory from the street. There’s an ancient machine ticking away and large drums of coconut oil stacked in front. Coconuts are big business here.

Quite how big we discover at our next stop, the Revi Karuna Karan Museum. Mr Karan was CEO of the Karan Group whose principal activity was producing coir products, made from coconut fibres. He passed away in 2003, and his widow decided to create this museum as an act of love for him and in his memory, and to display the many artefacts that they had collected together over the years. I was interested to learn that he was an enthusiastic Rotarian and benefactor, and the museum contained some of his Rotary regalia including several Paul Harris Awards, familiar to all Rotarians as the highest badge of outstanding service that the organisation offers.

We enter the museum to find a 1950’s Buick car owned by Mr Karan. The curator tells us that there were only two motor cars in Kerala state at one time, one owned by the Maharajah, and this one.

We move on to view cabinets full of ethnic treasures from around the world, all very interesting. Then there’s another large room, then another, and another. We walk past cabinets containing Meissen porcelain, Wedgewood and Royal Doulton, Lalique glass sculptures, Fabergé eggs, and the largest collection of Swarovski crystal we’ve ever seen. There are shelves full of exquisitely carved ivory figures, and the curator is at pains to point out that ivory is now banned but this is all certificated.

There are paintings, English and Keralan furniture, and a thousand other things besides. It’s an amazing collection and takes us completely aback in its scale and quality. Biju has dropped other visitors here before but never been round himself, but this time they’ve allowed him in and he is in awe too. He tells us that he thought the 300 rupee entrance charge (about £3) had been expensive, but now he’s seen the treasures within he’s revised his opinion.

A large group of schoolchildren enters the museum, resplendent in their blue uniforms. They are chattering loudly, and the grandeur of the place seems lost on them as they file dutifully past the rows of glass cabinets. They are more interested in us, and we field lots of enquiries as to where we’re from, our names and lots of other questions. Biju chuckles when I tell him that they are like a swarm of blue mosquitoes. 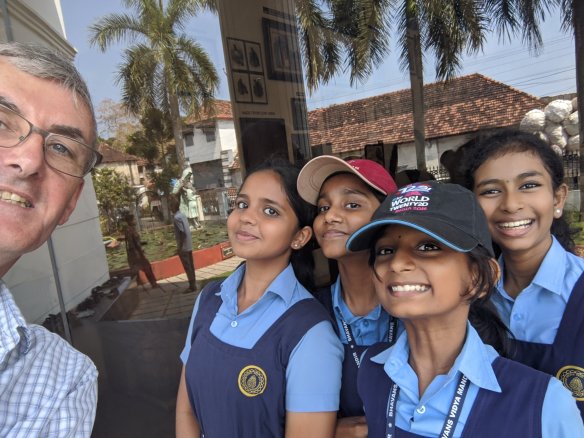 We leave with mixed feelings. It’s certainly a magnificent collection, but we can’t help feeling that it’s been driven by the desire to acquire for the sake of it. There is just so much stuff here that it seems more like an upmarket warehouse than a lovingly constructed celebration of the art it contains. But maybe we’re being too harsh.

We extract ourselves from the school outing and continue our journey. We’ve mentioned that we’re thinking of family gifts for our return, so Biju pulls in again at the Kasavu Aalayam Handlooms shop. We enter to the loud click-clacking of the said handlooms operating beside us. The weavers sit in pits at floor level, giving the appearance of being cast in cement up to their waists, and they deftly manipulate pull cords to flick the shuttles on the looms in front of them from side to side. 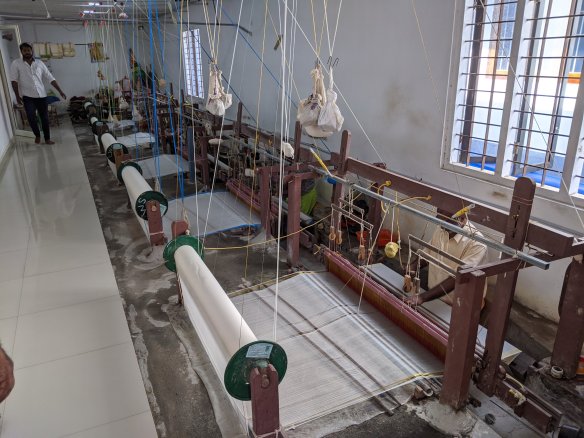 A few minutes later we’re inside the shop alongside men buying shirts and women buying saris. I hadn’t intended to make a purchase but Sue likes the look of a handmade shirt on the shelf, so I take off my shirt in the busy shop to try the new one for size. No-one gasps.

The Purity Hotel is not far from the main road, along what I can best describe as a cart track. It’s not the sort of entrance we expect to a top hotel, but suddenly we’re here and we turn into the inauspicious courtyard. Again we are personally greeted and led through to reception. We’re in room 1, and when we get there it has to have the best view in the place. The floor to ceiling glass doors and windows give us an outstanding outlook across the huge Lake Vembanad. We can just make out the treeline on the far bank, about 2 1/2 miles away. The long, slender fishing canoes that are a feature here can be seen dotted over the lake, and in the distance houseboats and other larger craft traverse from right to left and back. The lake is smooth as glass in the still, humid air, and there’s a serenity that’s hugely appealing. 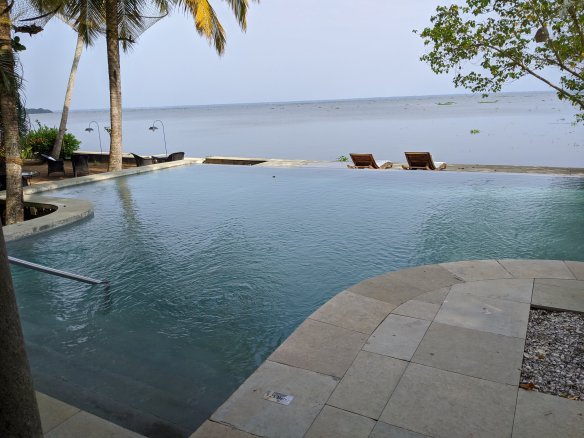 In the evening the thunder starts to roll in the distance, as the tail end of the monsoon season plays itself out. It stays at a distance, but we get the heavy shower of rain that accompanies the storm. We grab a lull in the downpour to walk to the hotel’s dining area, laid out around an inner courtyard, open at the centre over a large square pond. As we eat we watch the raindrops create patterns on the water.

The food is excellent, and yet again we wonder how the kitchen manages to achieve such a high standard in this apparently remote location.

Tomorrow is our last full day in India, and we don’t have anything booked. This place offers great scenery, tranquillity, excellent food and great service. What could be better? Our only concern is the ever-present mosquito population which is also looking for its evening meal. We do our best to thwart them with long sleeved clothes and application of insect repellent spray. It seems to be working but we remain vigilant.

Later, lying our room in bed, we are woken by the most unusual noise. It’s a constant high-pitched note, like a relentless squeal, and it’s loud. We decide it must be coming from the pond beside our room, but we aren’t certain.

It’s been another day full of unusual and unexpected experiences. Picking out the highlights from this trip is going to be very hard indeed.