It’s time to check out from the Spice Tree hotel and continue our journey. We’ve only been here for two nights and we wish it had been longer, it’s a delightful place, but we are heading for Fort Kochi, or Cochin as it’s also known.

We set off to negotiate the local roads, and gradually make our way along the Bison Valley. The roadside is interspersed with beautiful, modern looking homes and small one-room houses more like sheds, as well as the now familiar array of open-fronted shops and cafés as we pass through villages. Napoleon called the British a nation of shopkeepers but we have nothing on this with its streets crammed with enterprises of every description.

A notable feature of Kerala is the number and quality of Christian churches that we pass. Earlier in our trip to the east of here around Mysore, it was the multi-coloured Hindu temples that predominated, but they are much less in evidence here. We’ve heard that Kerala is a Christian centre in India, so we’re a little surprised to learn from Biju, our driver, that Hindus comprise over 40% of the population, Muslims over 30%, and Christians in the 20’s. George and the Dragon are much in evidence, and some of the churches are extraordinarily grand affairs, with brilliant-white painted structures and high facades. We spot several ladies at different times wearing the pale grey habits and white cowls of a nun.

Biju tells us that we are now at sea level. The landscape is busy with shops, stalls, houses, trees and crops, from bananas to coffee and everything else besides. This area is famous for its spices, and numerous establishments along the roadside offer tours of their garden and shop. We pull in to one, it sounds as though Biju has been here before.We’re always a bit sceptical when we are offered a tour which can easily morph into a sales pitch, but we have no need to worry. We pay 300 rupees and are taken on a detailed and informative walk around the grounds by a helpful lady who identifies the many varieties here and tells us how they are used. There is nutmeg, cardamom, ginger, curry leaf and peppermint to name but a few, and it’s all very interesting. At the end we are ushered into their shop. They are doing good business but we’re not in the market for spices today.

A few miles further on Biju pulls into a roadside diner. Earlier he promised us a traditional Keralan feast, and that’s what we get. He orders for us and we are given our banana leaf plate. The staff are attentive and explain all of the ingredients as they arrive. This is another time we begin with trepidation, but actually the food is delicious and we make a good job of demolishing most of it. A central serving of Kerala rice is accompanied by a range of sauces, four different vegetable mixes, poppadoms, and chutneys. Contrary to expectations it isn’t fiery at all, with the exception of one of the chutneys which could strip paint. Especially nice is a pineapple based mix, and a strong ginger chutney that goes well with the rice. It’s a really enjoyable meal, and for 190 rupees each it’s amazing value.

Further on we pull over again as Biju points out the rubber tree plantation next to the road. We get out to view the trees at close quarters, each wearing a plastic skirt halfway up the trunk to protect against rain. A white channel has been cut into the bark below this skirt, spiralling down around the tree and culminating in a small collecting cup. Biju removes the white latex from the channel and shows it to us. Immediately the cut begins to bleed and globules of the bright white sap run down the trunk. We ponder how many such trees are required to feed the global demand for vehicle tyres, most of which are made from this stuff. 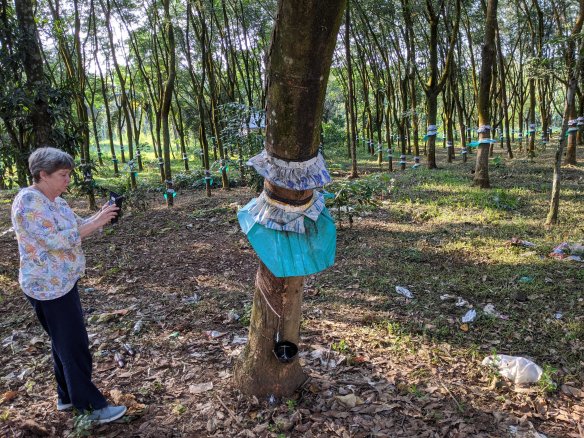 We’ve been on the road for several hours now, and we’re getting in to the outskirts of Kochi. It’s a large, busy city, the capital of Kerala state. We cross the water into the old quarter and Fort Kochi, and eventually find our hotel, the unusually named Eighth Bastion. We are warmly welcomed, and settle in to our room overlooking the hotel’s central court and small swimming pool.To get our bearings we venture out for a short walk to the sea front at the end of the street next to the hotel. It’s a lively night-time scene, with souvenirs, trinkets and fast food stalls competing with each other. It’s busy too, this is obviously a popular spot with young people and families. It’s like Alicante on steroids. Despite the numbers though, we feel perfectly safe and relaxed strolling along the promenade.We don’t venture far but return to our hotel and its restaurant for our evening meal. The service is as we are coming to expect in India, very attentive and eager to please. Our meal is excellent, not that we need too much after our feast earlier.

Tomorrow we’re scheduled to tour the area on foot. We’re looking forward to finding out more about it.