Sue wakes me with great excitement just after 6 am. The sun is coming up, casting a glorious pink and golden hue on the clouds, and the local fishermen are setting off for the day in their long canoe-like boats. We watch as they head out from the shore, dark silhouettes against the morning light. It’s a scene that lasts for only a few minutes as the sun rises, pink turning to bright white, its rays reflecting on to the ceiling of our room through the full-length patio doors, rippling as the breeze gently ruffles the surface of the lake. I’m happy to forgive my unexpectedly early morning call to witness such a sight.

Breakfast is served to our table. I choose pancakes with banana and honey, never too sure what to expect. When they arrive they are two small amber coloured parcels delicately wrapped around a soft slice of banana, with the honey in a separate dipping pot, and they are divine. I’ve always considered breakfast to be my favourite meal of the day, and this is the best yet.

After breakfast we’ve arranged to visit a local coir factory. Our tuk-tuk arrives and Rahul from the Purity Hotel accompanies us on the short drive to the small town of Muhamma, and we pull in to the factory entrance. Buildings are grouped around a central yard in which long red ropes are stretched out, and we cross the road to see an ancient machine used in the process. Around the corner we enter a huge barn chock full of the fibres extracted from the coconuts from which coir is made, as well as large rolls of carpet ready for export. In the UK we probably associate coir mainly with doormats, but clearly there are many places that use it extensively as a flooring material.

Further on we enter the main ‘factory’ proper, another series of large barns. It’s dingy and dusty in here, with a thick layer of coconut dust covering the floor we walk on. We are shown the machine that strips the fibre from the dried coconut husks, how the fibre is spun into string, the ladies stretching out the string into long lengths, the frame with a large circular drum where the strings are aligned into large rolls, and the weaving looms that turn these drums of fibre into carpets. It’s all mostly man-powered, and we stand in awe as four men use all of their weight and strength to operate the coiling frame, and two on a large loom treadle up and down on long wooden blocks, passing the shuttle between them to form the carpet that emerges. 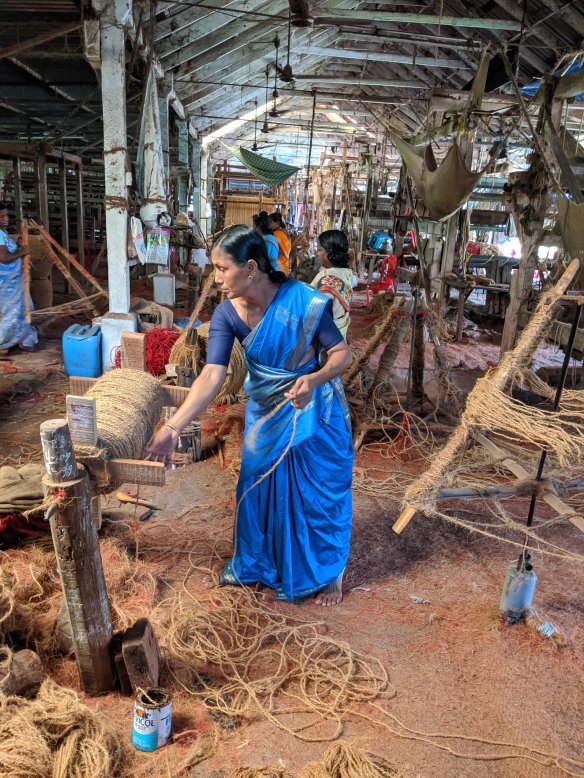 It’s hot, heavy work, and perspiration gathers on the men’s bare torsos as they work. I ask Rahul how much they can earn from their jobs in the factory.

“Up to 1,000 rupees a day,” he tells me. That’s about £10. But that is based on time and production targets so they don’t all receive that much, and the women are paid less. It’s a six day a week 8 till 5 job, the factory is closed on Sundays.

We reflect back on the unashamed opulence of the Karan family museum yesterday, built on the efforts of these people. At their wage of no more than £60 a week it would take years for them to afford even one piece from the Karan collection. I’m better able to understand why the communist party has a significant following in this business-friendly nation.

I spot the name ‘Goodacre’ on the factory wall as we leave. It’s only later when I look up the Muhamma coir factory online that I connect William Goodacre & Sons Ltd with the Karan Group, it’s owner and the family behind the museum we visited yesterday. It looks as though their collection of treasures might continue to grow for a while yet.

We spend our afternoon sitting outside our room at the Purity Hotel, enjoying the stunning views across Lake Vembanad. A local fisherman crosses a few feet away, laying a line of net that sits in the water marked by orange floats. We’ll try to be here when he returns. The crows are raucous and lively, and grebes paddle across the water before diving under, only to resurface soon a few yards away. Unfortunately the insect population also thrives by the waterside, and we are soon covered in red dots as they tuck in. Spraying with the Jungle formula we’ve brought doesn’t seem to make much difference, and then I realise that I’ve forgotten to spray my legs after changing into shorts following this morning’s trip. Oops.

It’s lovely out here, but we’re tempted to return to the sanctuary of our air-conditioned room.

At about 4.30 a canoe passes close by our window and makes for the gazebo in the centre of the area next to the lake. Sue reminds me that we were offered a boat ride when we arrived yesterday, so I go to enquire and find that this is indeed the man. He says the trip is complimentary but I need to go to reception, and they tell me he’ll be leaving at 5.00 and it’s around an hour.

Soon after we find ourselves carefully climbing down into the boat, feeling unsteady as it rocks from side to side. It’s just wide enough for two but the boatman suggests we sit in single file. There’s another young woman coming on board with three young children, and they sit at the front as we set off. She tells us they’re from California, and she’s their chaperone. Mom and Dad have sold their house in San Francisco to travel around the world. The frizzled blonde three-year-old asks questions as we go, but the others sit quietly.

As we punt away from the bank, it’s the quiet that is striking. The surface of the lake is smooth with zero breeze, and we glide along with only the sound of our driver’s pole entering the water as accompaniment. We follow a course a hundred yards or so from the bank, and women washing clothes at the lake edge wave happily to us. Further on we pass the rear of two hotels, one a large elongated three story building with great views over the water. “Lemon Tree Hotel,” says the driver from behind. “Not as good.” I’m reassured by our hotel choice, although the boatman’s assessment may not appear on Trip Advisor.

He points to our right and exclaims “Kingfisher!” We are steering between the shore and a long row of the large elaborate sets of Chinese fishing nets that we saw on the beach front at Kochi. They comprise a wooden platform behind a series of long poles forming a triangulated frame, from which is hung a 30 feet square net. The net is pivoted into the water and lies underneath the surface, then raised to bring up any fish that have ventured into the net. The whole thing is held together with long wires, and naturally birds sit on these. One of these birds is vivid blue, with the distinctive long beak we know from the kingfisher in our local brook at home, although this bird is larger than we’ve seen before. As we watch it swoops from its perch with a brilliant flash of colour.

We go slightly further from the shore, and our driver seats himself and begins to paddle gently in the deeper water, negotiating us to the far side of the fishing nets before turning the boat for our return. Unexpectedly, though, he pulls up alongside one of the platforms and ties the boat to it, then gestures me to step up. I can’t quite believe that he wants me to get out of this rocking canoe onto a stage well out in the lake, but that’s exactly what he wants and I clamber out, followed by children and all. Once we’re all up, he turns and hauls on the rope beside him, slowly raising the net from the water. He beckons the two young boys to follow him, and they walk gingerly along a scaffolding pole out to the net to inspect their catch. They return with a bucket of small fish, including tiny pearl spot and an eel-like fish, only an inch or two long, and our host tips them all out onto the wooden platform. There’s nothing here worth consuming, and he suggests that the catch is better at night-time. The kids are enthralled to pick up the tiny fish and save them by casting them back into the lake with great glee.

We carefully ease ourselves back into the canoe and head back to the hotel. Mom and dad are waiting on the bank to photograph their children’s return, and we thank our fisherman who surreptitiously glides away again before we can say a proper thank you. He’s given us a delightful experience, and one that we’re pretty sure wouldn’t be allowed back home, at least not if the Health and Safety people had anything to do with it.

It’s our last night here, and after last night’s thunderstorms and rain we are pleased when we see dining tables being set out at the lake’s edge. Candles are lit, and they barely flicker in the still calm air. It’s still in the high 20’s centigrade, and we enjoy a super meal under the stars. As we wait for dessert it begins to rain so we all retreat under cover, and we finish our meal inside the hotel’s open inner courtyard.

We reflect on yet another day that, whilst gentle and relaxing, has also been full of interest and surprises. It’s been typical of our time in India so far. We’re setting off for Kochi Airport tomorrow evening to make the two-hour flight up to Mumbai, from where we’ll head back to London. It’s all gone much too quickly.