I’m in Cologne, Germany, a city with a history from pre-Roman times. Like so many great cities, Cologne was built on trade, being ideally placed on the mighty Rhine and an important crossroads for different peoples over the centuries. It’s magnificent Cathedral is now one of the most popular attractions in Germany, with an average 20,000 visitors a day. 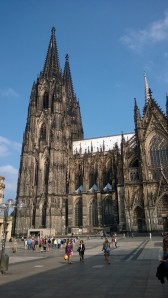 Despite losing almost 9 out of every 10 buildings in the Second World War, Cologne has reinvented itself as a new trade centre, with its easy access by plane, train and automobile making it a highly successful conference venue, it’s Koelnmesse centre hosting 2,000 conferences for 2.7 million visitors each year. It has also built a reputation as a  media town, with major TV networks and production facilities based here.

If you want to do business it certainly pays to stand in the path of trade. Open your shop where the people are, or where they can get to you easily. Even just being on the sunny side of the street can make a big difference.

Although opening your restaurant in the shadow of a Cathedral with this many visitors would still seem a wise business decision to me.