The last two days have seen us navigate through two of the most dramatic lengths of waterway on our canal system, although dramatic for very different reasons. From the historic Castlefield Basin in the centre of Manchester we follow the first nine locks of the Rochdale Canal for our first drama. 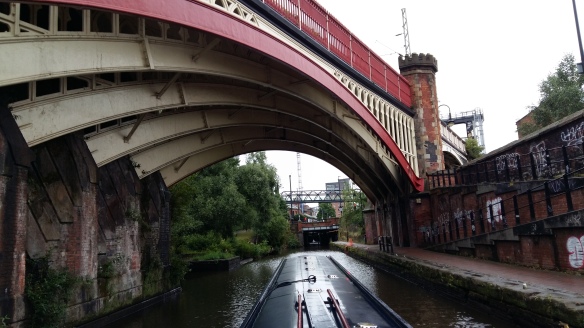 The canal rises up through the heart of the City to Piccadilly Junction, completely overshadowed by, yet an integral part of, huge office buildings, alongside people at workstations, gazing into their PCs and canalside commuters, business people and tradesmen, some of whom stop to watch us go by, some with a sombre blank expression, lost in thought, others with a cheery wave from an office window.

We go past and then right underneath huge buildings, the foundations of which form dark, low-roofed tunnels, Victorian history below a high-tech City. New construction soars over the canal, a working crane vertically above us as contractors create a new development straddling the canal. We have to duck low as the bridges press down on the waterway, stealing its valuable city space in every direction.

Trains and vehicles criss-cross the canal on historic iron and period brick arched bridges straight from the history books, mixed in with modern concrete, glass and steel structures that showcase the vibrancy above. It’s a hugely busy scene and one that has to be experienced to be fully appreciated.

As we approach Piccadilly we follow Canal Street, self-proclaimed home of Manchester’s Gay Village. Many of the bars along this colourful street overlook the canal, and travelling along here on a Saturday night must be a different experience again. Perhaps one we’ll forgo for now.

We’ve heard stories of problems with drug users in this area, and we keep our wits about us. Canals seem to draw certain types of people for some reason, and today there are a couple of young men who we aren’t too sure about. They seem harmless enough though, and we pass without incident.

At Piccadilly Junction we turn right on to the Ashton Canal and the 18 locks that take us up to Dukinfield. This part of the city has changed a bit since our last trip through here, with the Manchester City FC ground dominating the skyline and lots of new community developments. The locks, by contrast, are old, heavy and creaky. They have anti-vandal locks fitted which makes progress even slower, and this isn’t the most enjoyable flight we’ve ever navigated.

Coming through Manchester by boat isn’t an experience everyone would savour for their holiday, I’m sure. For me though, the trip has been hugely enjoyable and full of unusual perspectives on this great City. If you like life in all its aspects, you’ll enjoy it too.

And then, a day later, the total contrast of working the flight of 16 locks rising into Marple. The canal crosses a superb aqueduct, built in 1805, offering the always unusual experience of navigating a boat along a channel itself high above a waterway. The views down to the River Goyt below are vertiginous and stunning, a picture of the English countryside at its best. The locks themselves are as fine as any, set in gorgeous woodland with tantalising views through to the rolling countryside beyond. The solid stone locks are attractive and relatively easy to work after the slow and heavy Manchester versions, and Marple welcomes the canal to its heart with obvious pride.  Reaching the top feels like a real achievement, and we finish the day with a very tasty Indian meal on board, supplied by ‘Marple Spice’ only yards from the canal and highly recommended.

It’s been a very enjoyable day.