It’s Monday evening and we are sitting in a presentation by Rohan, brother of the owner of the Jungle Hut, our home for the next three days. He is showing us pictures of the animals that come through the hotel ‘campus’, captured on motion sensor cameras. We watch an elephant walking by the swimming pool, a pangolin, porcupine and hyena in the grounds, and bears walking past our lodge in the middle of the night. I can feel Sue tensing up.

He goes on to show us pictures of the many colourful bird varieties resident here. She relaxes.

Next it’s snakes. The Russell’s Viper apparently accounts for half the 50,000 annual deaths from snakebite, hissing like an airhose before it strikes. Rohan’s video shows a close up view of a simulated human foot treading on a snake, which responds by sinking it’s fangs into said foot. This is not good.

When we move on to the six-inch long tarantula seen on campus, I’m expecting Sue to be out of here. She braves it out.

The Jungle Hut is laid out with its 16 rooms arranged in lodges dotted around the grounds. On returning to ours for the night we scour the floors, windows and cupboards for signs of snakes and arachnids. Suggesting that at least they’ll be big enough to see doesn’t help.

Our day had begun earlier with breakfast in the luxurious Radisson Blu Hotel, surely the best hotel in Mysore. We check out and hit the road, back into the melee of cars, bikes and cows. As we head out of the city the traffic gradually thins out and becomes less frenetic, although this is still a busy road. The buildings give way to fields of rice, palm trees, sugar cane and many other crops. The occasional hill in the distance reminds us of Wiltshire, except for the palms of course.

The driving style remains one of keeping going regardless of what’s ahead. Biju overtakes as traffic is approaching, and I think he’s maybe cutting it a bit close, until another car appears at my right shoulder overtaking the overtaker. It’s standard practice here, and no wonder Mysore road deaths are 10 times higher than London per head of population.

We stop for a comfort break at a coffee chain restaurant. The cappuccino is first class, although a lot dearer at 150 rupees per cup than the family run stop on our first day here which charged 30, equivalent to less than 30p.

As we continue the hills begin to rise around us, and eventually we enter Bandipur Tiger Reserve with great anticipation. Now the land is mainly forest, a bit like untended woodland in England but denser and very green. Signs give stark warnings about stopping, taking selfies, or getting out of vehicles. They take the conservation of their parks and animals really seriously here, but they have no need to worry. If I see a tiger I certainly won’t be taking a selfie with it. 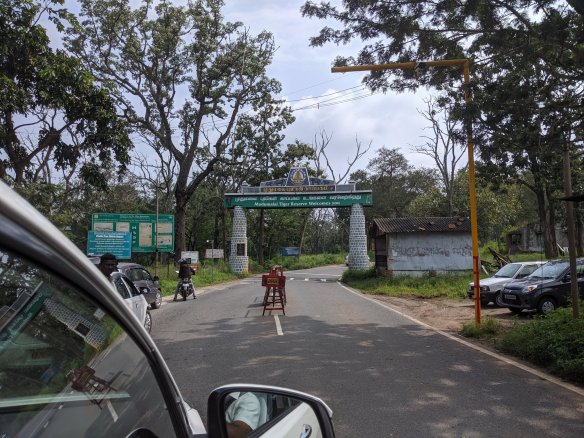 We cross the state line out of Bandipur Park in Karnataka, and into Mudumalai Park, Tamil Nadu. We’re looking out for elephants and I think I catch a glimpse of one in the distance, but Sue maintains it was a flying pig. This terrain is remarkable for having no habitation and very few pedestrians, other than the occasional uniformed Forest Rangers, until we reach Masinagudi, a busy, frenetic town bursting with activity. Biju stops to ask for directions, and we continue out of town for a mile or two, then turn right up a single track road. A couple of miles further and we pass a colourful temple and then, in front of us, is the sign for the Jungle Hut, our home for the next three nights. We pull up in front of reception, part of the open-fronted main building, and sign in.

Our lodge is only a few yards walk away, and it’s apparent that this is going to be a hugely different experience from the Radisson. As the porter carries our bags to our room, monkeys play on its roof and spotted deer watch us from a few yards away. As we are soon to find out from our host, that’s not all there is here. 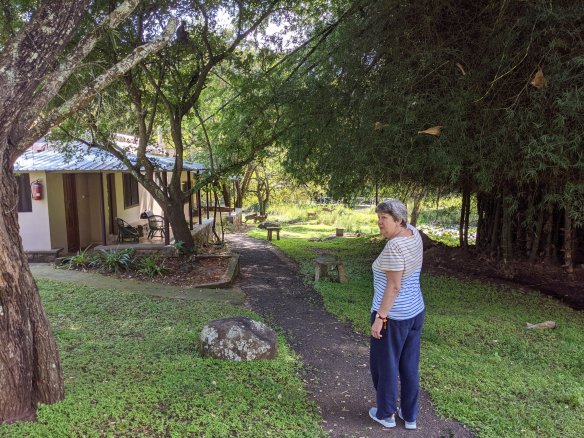 So now we sit through Rohan’s presentation with a mixture of anticipation and trepidation. Tomorrow we’ve arranged to meet Solomon from Grace Charitable Trust, one of the charities we have come to visit. We hope we make it through the night.