We sleep soundly despite our ordeal by PowerPoint last night and the all night long cacophony from the frogs chorus a few yards away on the pond. We’ve arranged to meet Solomon this morning, and at 10 am he arrives on his Royal Enfield 350, the connoisseur motorcyclist’s choice in these parts, and we make our introductions.

I admire the bike and he generously asks me if I would like to ride it? I don’t need to be asked twice, and so I find myself following our car into Masinagudi to the steady thump of the Enfield engine. It’s an easy ride, and I can see why these bikes are popular here with their 80kph speed limit. My own Adventure Ashram! 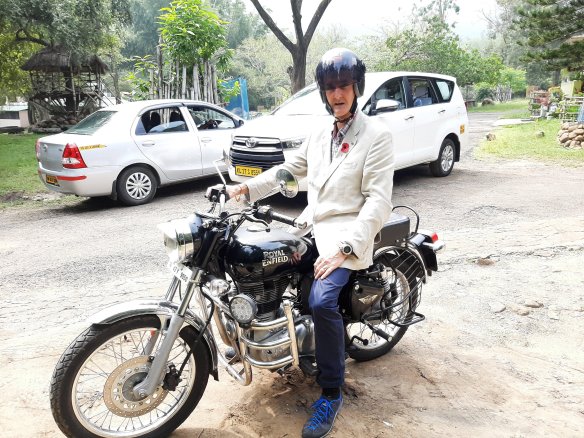 Unfortunately the ride comes to an end too soon, and we park in the town square whilst Solomon goes to get his car. He’s allowed into the Park but our car would need a permit, so he drives us up to the local dam which feeds the area with water and powers the hydro electric station further down. There’s a village alongside, and Solomon explains that some of the houses serve people who work at the dam. It’s quite remote here, and the villagers rely on local buses to get around. Walking through the forest isn’t recommended, and can be dangerous.

We head back to Masinagudi, and along the way we spot numerous deer, mongoose (like furry tailed otters), and a large hawk looking down on us from a tree. Solomon knows his wildlife. Regretfully no elephants, though.

We return to the Jungle Hut and sit enjoying the afternoon warmth. We’ve arranged to meet Solomon again at 5.00pm, and at the appointed hour we head off with Biju back to Masinagudi. Solomon waves from the busy street side, and we pick him up and head out of town. Our destination is the Elephant Camp. As we approach, Solomon points out what’s happening in the river below, and we look down to see a large elephant, mahout on its back, wading across. Our first elephant sighting!

We pull in to the Safari reception and buy tickets for 600 rupees – it’s more expensive for foreigners. We cross back over the road in the car and walk the short path to the Camp, and here they are! The elephants are lining up next to the feeding station, and they are a magnificent sight. Solomon explains that the oldest animal here is 70, and they are semi-wild. Their mahouts (keepers) help feed and train them, and this place is a sanctuary for them, many of which have been rescued. He explains that one beast was used in Hindu processions and festivals, and among the noise and chaos, including music and firecrackers, it panicked and killed someone. It was brought here to be trained. Another large bull elephant killed two people before heading for the jungle. In trying to capture it the elephant was shot but didn’t die. A tranquilliser dart was used to little effect, then a second, and the animal fell into the river where it could be controlled. Appeals were made to kill it due to it’s nature, but it was brought to the Elephant Camp where it was trained for six months and became tame enough to be trusted. 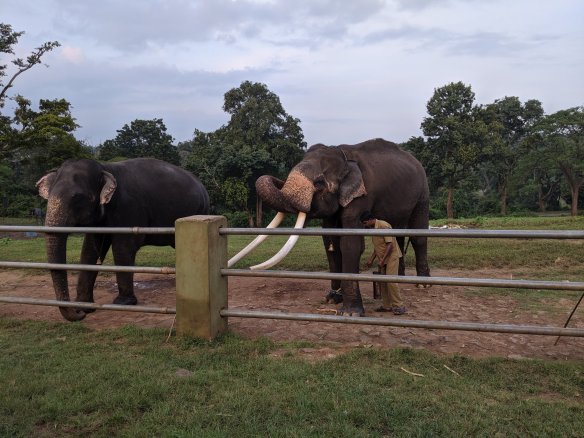 We recognise one of the elephants as the one crossing the river earlier, with a distinct marking on it’s trunk. It joins the others as feeding takes place, with large balls of rice and horse gram moulded into a pack that the elephants take into their mouths and stand munching, making more noise than our family Christmas dinner.

The light is fading, and our day is by no means over yet. We reluctantly leave the scene to head back up to one of the tribal villages. As we travel in the half-light, suddenly there’s a large bull elephant beside us. It’s great to see it truly in the wild.

We continue our journey. We’re going to school!